Purcell’s debut feature film as writer and director, filmed in late 2019, has emerged out of a lifelong connection with this story. Citing three generations of drovers in her own family, Purcell explained in a recent interview how, as a five-year-old girl, she would implore her mother to read Lawson’s story to her. For Purcell, it was, “the first time I used my imagination and saw myself in a story”.

As her mother recited, Purcell would imagine a “little film in my head”. In it, she was the little boy in the story and her mother the drover’s wife.

Purcell has been repeatedly drawn to The Drover’s Wife as a way of placing her Indigenous family’s story before a broad Australian audience. The film expands on the acclaimed stage play she wrote and starred in, which premiered at Belvoir Street Theatre in 2016 and won the Victorian prize for literature, two NSW premier’s literary awards and four Helpmann awards. She also adapted the play into a novel, released in 2019.

In all three versions of the story, set in 1893 in the Snowy Mountains in NSW, Purcell gives voice to Indigenous experiences of the frontier that were maligned and marginalised in Lawson’s version.

As in the play, the film is carried by its Indigenous co-stars. Purcell plays the drover’s wife, Molly Johnson, unearthing an Indigenous heritage for the character. Johnson is burdened by a dark secret and Purcell imbues the role with a determined strength, her posture and gaze expressing fortitude, grit and constant vigilance, whether she is carrying her broom or her rifle.

Rob Collins plays Yadaka, a character inspired by Purcell’s great-grandfather, Tippo Charlie Chambers, a caring and gentle man who spent time as a travelling circus performer in the 1890s while yearning for his Country. 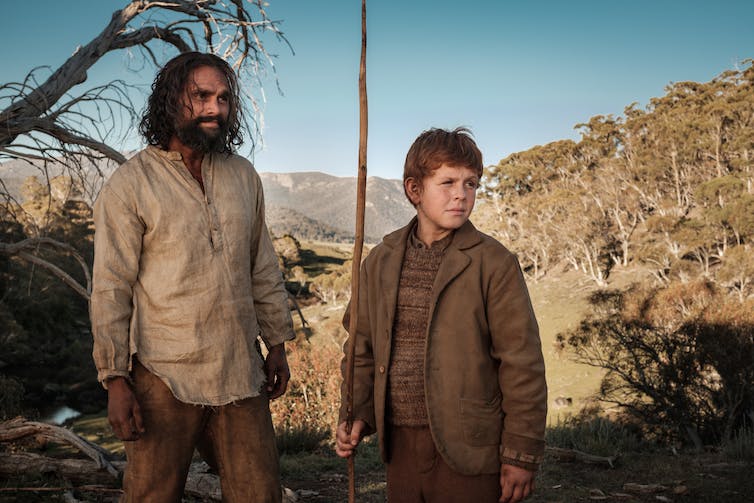 Yadaka is central to Purcell’s reworking of the original story, fleshed out from the brief mention of a “stray blackfellow” who chops some wood for the drover’s wife in Lawson’s version.

In the film, the fugitive Yadaka arrives at the heavily pregnant Molly’s isolated property and ultimately saves her life when her labour goes wrong, helping her to bury her stillborn child. But Yadaka is a wanted man, blamed for the murder of a white family in town. This sets off an unfortunate chain of events.

Yadaka also unlocks Molly’s understanding of her Indigenous family, paving the way for her children to escape from becoming wards of the state. The strong bond the drover’s wife has with her children in Lawson’s original story is deepened in Purcell’s film. Molly is driven to protect her children from the authorities and to overcome violence and hardship.

Molly’s eldest son Danny – played by Malachi Dower-Roberts, who Purcell joyfully describes as a “red-haired freckled Blackfella from Glebe” – functions as a figure of hope in the film.

He forms a bond with Yadaka, taking responsibility for guiding his siblings to safety. The absence of the drover himself, Jo Johnson, meanwhile, is attributed to his being a violent drunk and an abuser, rather than the heroic, pioneering figure imagined by Lawson. 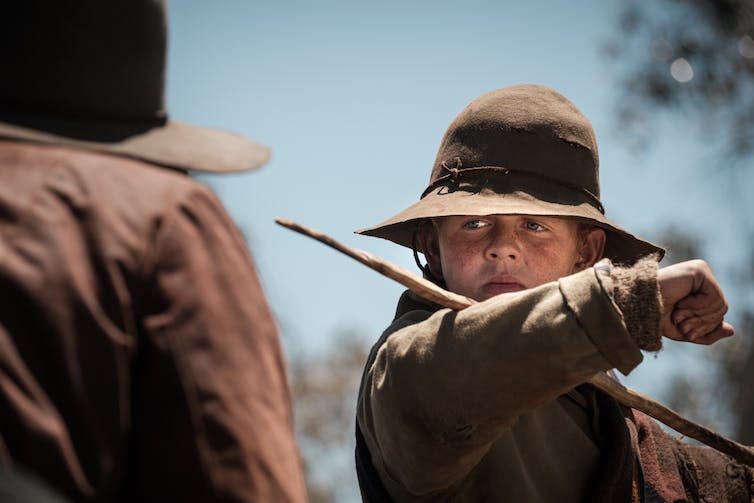 The film was shot in and around Adaminaby. Cinematographer Mark Wareham captures the beauty and harshness of the rolling hills and valleys of this vast, alpine landscape, from dusty clearings to lush greenery and stark, white snow.

Foreboding, enveloping mists are rendered by the time-lapse photography of Murray Fredericks. The beauty and menace of this landscape frame the film’s harrowing violence. The final closeup shots are especially chilling.

Purcell’s is not, of course, the first re-imagining of Lawson’s story. In 2017, Frank Moorhouse brought together a collection of its numerous literary reworkings in The Drover’s Wife: A Celebration of a Great Love Affair, including the writer and director’s notes from Purcell’s original play.

But Purcell’s cinematic version of the story exemplifies what Felicity Collins and Therese Davis describe in their book Australian Cinema After Mabo as a process of “cinematic backtracking”. Familiar figures and archetypes are revived and reworked, opening up new meanings and interpretations.

In recent years, we have witnessed a surge of interest in the archetypes, themes and aesthetics of the Western in Australian cinema with films like The Proposition (John Hillcoat, 2005), Sweet Country (Warwick Thornton, 2017), The Nightingale (Jennifer Kent, 2018) and High Ground (Stephen Johnson, 2020). All suggest a growing reckoning with the violent realities of our frontier history.

Purcell’s film is part of this turn.

By bringing her personal history and identity as a Black woman to bear on the Australian Western, Purcell has enriched this burgeoning film cycle.

The way that Purcell’s Molly Johnson endures in this film is both inspiring and heartbreaking. This is a subversive survival story that brings an unflinching new perspective to Australian cinema’s ongoing engagement with the frontier.

In celebration of bees