The series ‘Hidden women of history’, looks at under-acknowledged women through the ages and this week we’re shining a light on one of Australia’s first female graphic designers – Ruby Lindsay. Ruby Lindsay was among the first women in Australian graphic design. In the early-20th century she pursued a full-time career in magazine and book illustration, likely the first woman in Australia to successfully do so.

Lindsay created a beautiful array of work during the arts and crafts movement, in the early 1900s. This was a period when artists and designers reacted against the mass production of the Industrial Revolution and focused instead on handmade work.

Born in 1887, Lindsay grew up in the gold rush town of Creswick, Victoria, with her five brothers and parents Robert (1843-1915) and Jane Elizabeth (1848-1932). She moved to Melbourne, at the age of 16. Her designs included hand drawn type and posters, like a Sydney Society of Artists poster from 1907, and black and white illustrations for newspapers of the day, including The Bulletin, Punch and The Gadfly. 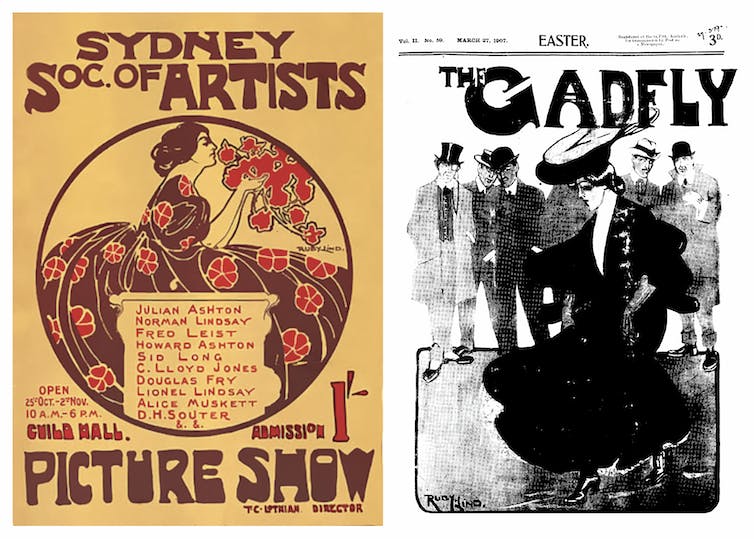 Poster for the Sydney Society of Artists’ Picture Show, 1907 (left) and cover illustration for The Gadfly, both by Ruby Lindsay, 1907 (right).

Even though she made a significant contribution, most have never heard of Lindsay because women working at this time were marginalised by their gender and society. Restrictive ideas about identity, roles and expectations were something Lindsay quietly challenged through her practice in graphic design.

Lindsay’s visibility was overshadowed by the men surrounding her – her brothers Percy Lindsay (1870–1952) and Sir Lionel Lindsay (1874-1961), who were also well known for cartoons they had published in The Bulletin; Norman Lindsay (1879-1969) who was the author and illustrator of The Magic Pudding; and Daryl Lindsay (1889-1976), who was knighted for his services to art in 1963. Her eventual husband was the Australian artist and political cartoonist William Dyson (1880-1938).

However, Lindsay went to great lengths to stand on her own two feet. She deliberately obscured her relationship to her famous brothers by changing her name and signing her work as “Ruby Lind”, “Ruby Lyne”, “Ruby Lyn” and once, in At the Labour in Vain, as “Ruby Ramsbottom.”

Lindsay also distanced herself from the general misogynistic tone of The Bulletin. This newspaper was extreme in its Nationalist tone, which, as various historians have noted, marginalised and mocked women.

Ironically it was her brother Daryl who wrote, in his memoir The Leafy Tree, of Ruby’s drive to break the suppressive female stereotype of the day. “Social engagements, affairs of the heart, all took second place to [her] overriding ambition to become a black and white artist,” he wrote. Lindsay was tough and showed how determination and a self-made image required an independent and forceful effort. She was “never without a sketch-book and pencil in her hands …”, Daryl wrote. Artist Ruby Lindsay, who took the surname Lind to distinguish her work from that of her famous brothers.

It’s doubtful Lindsay could afford a formal education but due to her head-strong efforts she was noticed by William Moore in the short-lived magazine Native Companion. In 1907 he wrote, “She has turned out every variety of drawing, from book illustrations to designs for pantomimic costumes … Ruby Lindsay must realise that she has already made a distinct advance.”

In 1907, the Melbourne Exhibition Buildings hosted the extraordinary Women’s Work Exhibition, which gave Lindsay a chance to show her work. The event, according to the catalogue, drew both royal and international audiences and “over 250,000 attendees”, who flocked to see the work on display.

The event exhibited “women’s craftwork and patriotism … displaying a distinctly feminine response to Australian nationalism.” It came at a time when Australia was still new to Federation – in fact the Royal Melbourne Exhibition buildings were the location for the first sitting of the Federal parliament. 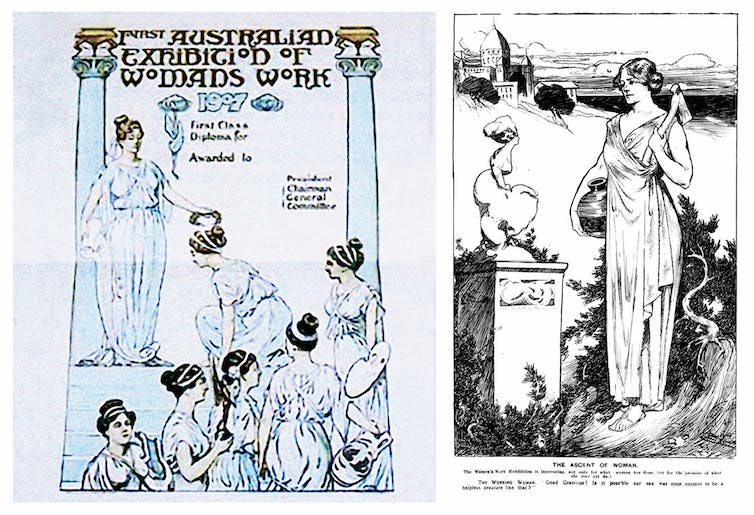 The political discourse in Australia, at this time, focused on Nationalism, childbearing and parenthood, and feminism, and the exhibition provided an opportunity for women to have a presence in these discussions. Following international events, such as the Philadelphia Centennial Exhibition of 1876, the Melbourne exhibition was significant because it was not a single pavilion but a fully dedicated event for women to demonstrate their participation in the amateur and paid workforce.

There is no denying this period in Australian history saw a woman’s place as being a mother and wife, however the exhibition was also an opportunity to challenge these ideas. Lindsay engaged enthusiastically in the event and submitted many pieces in competitive categories. She both designed and won the First Class Diploma.

Graphic design – referred to as applied art at this time – was also represented by Eirene Mort (1879-1977), who submitted an alphabet influenced by Australian flora and fauna, and also designed the second class diploma. Her illustrative certificate displayed women’s work that included depictions of manual and farm labour.

One of Lindsay’s illustrations that appeared in Punch at the time, communicated her will for women to succeed at the event. It shows a woman standing with an axe and ceramic pot in her Grecian garb. Signed “Ruby Lind”, it encourages woman’s contributions to society outside of the home. Through the image Ruby demonstrates that women should be viewed as more than domesticated objects.

Lindsay’s life was cut short when she died, of what might have been the Spanish Flu. She had married Dyson and given birth to her daughter Betty while living in London. Her almost forgotten legacy is worthy of celebration because it has laid a foundation the Australian design community can be proud of.

Her independent streak was with her to the end – the name on the headstone in London reads “Ruby Lind”. Bookish – The Art of Paper

The Alchemy of SWC – The Soundscape